Everyting you do  is a project. So use Project Management Blue!

And Serendipity marches boldly into the World.......unstoppable!

Since 1754 serendipity marches on from the fairy Tale "The Three Pincess of Serendip" to the real world. In the 1990 Pek van Andel became the ambassador of this word in the Netherlands. Until then it was a well known phenomenon in R&D. In 2006 Alfred J.Bollebakker captured Serendipity in the entangled 3-angle:

1-Project ( where the Will is included )

and since everything is a project serendipity can now march on to the project world and Daily Life.

After testing for 8 years in many projects the 3-angle was transformed on 27-dec-2014 into the Blue Swan (serendipity) Navigator. It was a process now and serendipity can be invoked systematically. But it is also a Quantum Leap for Mankind because with the Blue Swan Navigator everyone has full control of the Unknown ( via Efficiency and the connected Serendipity ....always within a Project). 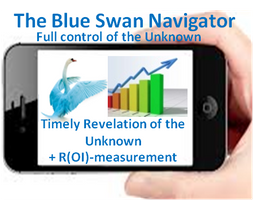 More about Serendity ( although dated )